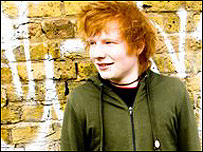 CHART REFLECTION. The singer-songwriter Ed Sheeran has taken the UK by storm with “The A Team,” which is now followed by “You Need Me, I Don’t Need You.” The 20-year old singer will release his debut album this September dubbed as +.  The singer has already made his tracks available via Soundcloud, where fans can listen to remixes of his different tracks.

His debut hit “The A Team” was actually written after a last minute performance for homeless people. It’s about a heroin addicted prostitute. Should you recognize the chorus, it has appeared on the track “Little Lady.” It appears on Sheeran’s independent album release No.5 Collaborations Project. Today, he is signed to Atlantic Records. In a recent interview in the Yorkshire Evening Post, Sheeran advise upcoming singer songwriters to “Write as many songs as possible; do as many gigs as possible, wherever, just rock up anywhere with a guitar and just start playing. Always be nice to people and always give people the time of day.”

Ed Sheeran – You Need Me, I Don’t Need You (Single Version) by EdSheeran

Read more about Ed Sheeran and Example via WelcheMusic: