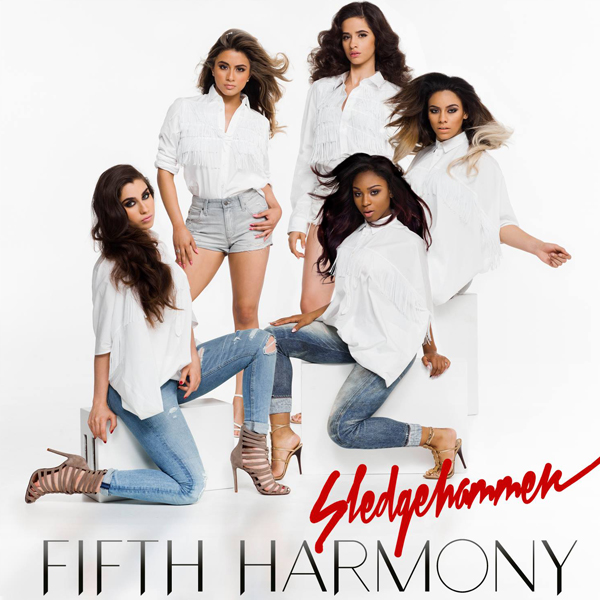 No, the American girl group Fifth Harmony has not done a cover of Peter Gabriel’s 1986 hit ‘Sledgehammer.’ Moving 75-40 on this week’s Billboard Hot 100, a brand new Fifth Harmony track is growing fast in its popularity.

Famous for her two current US hits ‘Lips Are Movin’ (No.4) and ‘All About That Bass’ (No.5), Meghan Trainor is also a respected and successful song-writer for other artists. ‘Sledgehammer’ is lifted off Fifth Harmony’s upcoming debut set “Reflection” and was co-written by Trainor, Jonas Jeberg and Sean Douglas.

The Danish song-writer Jonas Jeberg is famous for hits such as The Pussycat Dolls ‘I Hate This Part’ and Shontelle’s ‘Impossible.’ Sean Douglas wrote Jason Derulo and 2Chainz’s ‘Wiggle’ as well as Demi Lovato’s ‘Heart Attack.’ Production was held by Jeberg and Harvey Mason, Jr. who worked with Whitney Houston and Justin Timberlake.

In other words, a great set-up for the girl group who found fame via the second season of The X-Factor USA. As their previous hit ‘Bo$$’ peaked at No.43, ‘Sledgehammer’ has already become the biggest hit to date.

The members of Fifth Harmony began their career in The X Factor as solo singers, but they later formed a group. Throughout the competition they first named themselves LYLAS, later to be changed to 1432. Amongst other tracks, they performed ‘We Are Never Getting Back Together’ (Taylor Swift) as well as ‘Skyscraper’ (Demi Lovato). In 2013 they issued the debut EP “Better Together,” which will be followed by their debut set [“Reflection”].

Fifth Harmony – All I Want For Christmas Is You

Fifth Harmony recorded the cover of Mariah Carey’s ‘All I Want For Christmas Is You’ for the Epic set “I’ll Be Home For Christmas.” The record label compiled a set of Yuletide songs including artists like Meghan Trainor, Fiona Apple and Tamara Braxton.