28-year old singer Loreen won the hearts of the Swedes with the seductive dance pop track ‘Euphoria.’ Alongside Dead By April’s ‘Mystery,’ Loreen is qualified for the Melodifestivalen 2012 final at the Stockholm Globe Arena next month.

I wouldn’t be surprised if we’ll see Loreen on the stage in the Eurovision Song Contest in Azerbaijan and she might be joined by Tooji, whose ‘Stay’ qualified in the last heat of the Norwegian Melodi Grand Prix. Sweden’s Peter Boström has written both ‘Euphoria’ and ‘Stay,’ the latter sounding very similar to Eric Saade’s ESC top three hit ‘Popular’ from 2011.

Née Lorine Zineb Noka Talhaoui in October 1983, Loreen is of Moroccan-Berber descent. The singer made her breakthrough in 2004, as one of the finalists of Sweden’s Idol. She was actually picked as a wildcard by the judges, not immediately winning the public’s heart. Singing, Alicia Keys, Stevie Wonder and P!nk throughout the competition, her first single was ‘The Snake’ with the duo Rob’n’Raz. Loreen also worked as a television presenter at TV400, which has changed its name to TV11.

‘Euphoria’ did not only win the first Melodifestivalen heat, the reaction on Twitter and in social media channels were nothing short of phenomenal. A tremendous performance, leaving many viewers breathless and questioning whether it was live or playback (it was live, believe me!).

Last year, Loreen made her Melodifestivalen debut with ‘My Heart is Refusing Me,’ co-written by her with Moh Denebj and Björn Djupström. Despite not qualifying for the final, the single peaked at No.9 on the Swedish singles chart and spent 19 weeks on the tally. I wrote about her chart success last year in Loreen’s Sweet Revenge. According to the Scandipop blog, Loreen calls ‘Euphoria’ very mystical and dynamic. 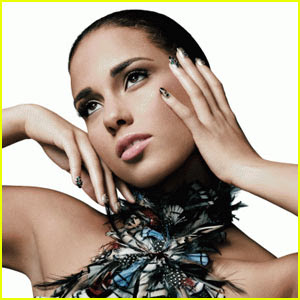 CHART REFLECTION. Happy days for Alicia Keys as YouTube and VEVO just made Alicia Keys’s performance on World Aids Day available for free. The concert is part of the original series UNSTAGED, dubbed Amex Unstaged due to its partnership with American Express.

WelcheMusic recently commented on Alicia Keys’s “Un-Thinkable (I’m Ready)” track off her set Elements of Freedom. Keys recently enjoyed her birthday at the end of January, and earlier this year we covered her comeback single “Speechless” with rapport Eve.

2010 CHART REWIND. As WelcheMusic looks back on 2010, one of the favorite tracks was “Un-Thinkable (I’m Ready).” The track topped the US R&B charts, becoming Alicia Keys’s first No.1 since “Like You’ll Never See Me Again” in 2007. Topping the chart for twelve consecutive weeks, an official remix featuring a verse by Drake was also released on iTunes.

The track was included on Alicia Keys’s album Elements of Freedom and followed “Empire State of Mind (Part II).” The video featured Lucas Scott from One Tree Hill. Alicia Keys also performed this track at the AOL Sessions.

CHART SPOTLIGHT. Two new Alicia Keys tracks have surfaced online. On “Speechless,” Keys re-unites with the rapper Eve. The duo peaked at No.2 on the Billboard Hot 100 back in 2002 with “Gangsta Lovin’.” Keys+Eve also collaborated on Angie Stones’ “Brotha Part II” (2001). According to Alicia Keys, “Speechless is a little freestyle treat 4 the holidays. It’s not a new album, not a single its something special 4 U!” via Twitter.

The new Eminem “Cocaine” track also features Alicia Keys and is rumored to be included on an upcoming re-issue of his No.1 album Recovery. Expect further updates from WelcheMusic soon.

Preview “Speechless” via our friends at Just Jared here!

Preview “Cocaine” via our friends at Real Talk NY here!

Want to read more about Alica Keys, click below: