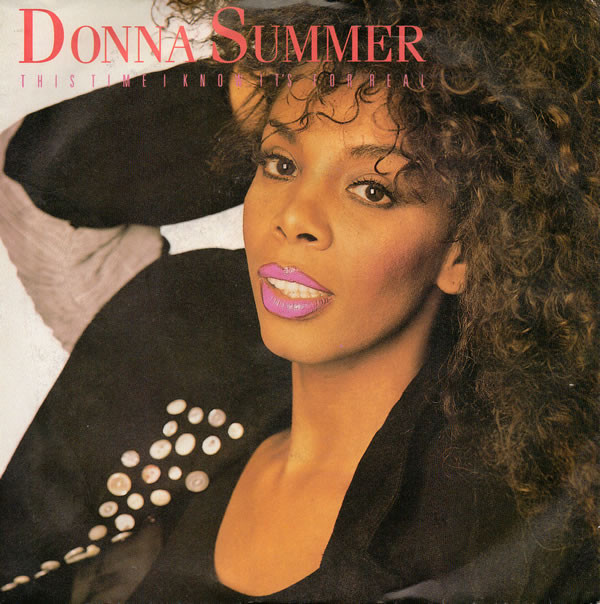 Lo and behold, but it actually turned 29 this year. ‘This Time I Know It’s for Real’ was the first single off Another Place and Time back in February 1989. It preceded the album, which spawned no less than five singles.

It’s definitely one of my favorites, not least because of the catchy video directed by Dieter Trattman. Donna Summer hadn’t released an album in two years, since All Systems Go (1987).

The disco vocalist did contribute to the hit, sharing writing credits with Mike Stock, Matt Aitken and Pete Waterman. And what a return to the charts! Summer hadn’t had such a huge hit in the UK since the ‘70s as it peaked at No.3.  ‘This Time’ was followed by ‘I Don’t Wanna Get Hurt,’ another catchy hit that don’t credit Summer as a songwriter.

While it was hit on both sides of the sea, different labels promoted it and the single don’t carry the same B-sides. ‘Whatever Your Heart Desires’ was the European b-side, while ‘If It Makes You Good’ was included on the US version. Both tracks were included on the album.

In 2004, a cover version with Kelly Llorenna peaked at No.14 in the UK. The English Eurodance singer debuted as a singer for N-Trance. Her biggest hit was providing vocals for the group’s hit ‘Set You Free’ in 1995. As a solo singer, Llorenna issued a lot of covers.

In 2006, Young Divas made a rendition of the track. This Australian girl group recorded the track in order to support a nationwide tour that summer. Produced by George Papapetros and Max Kourilov, the cover made it to No.2 on the ARIA singles chart. Despite the huge success, it wasn’t translated into global success. One such reason could very well be that they were formed out of Australian Idol, and that usually means local success only.