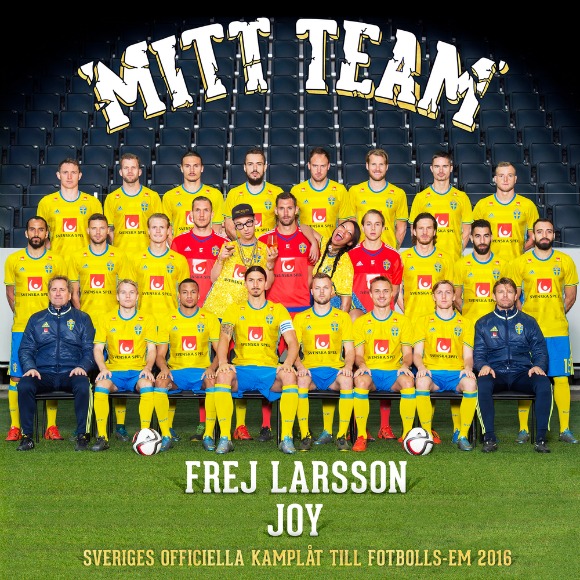 ‘Mitt team’ premiered live on the national breakfast TV show TV4 Nyhetsmorgon yesterday morning. The track entered the Spotify streaming tally for Sweden on Friday, racking up 84,095 plays entering at No.48. On yesterday’s chart which was only made available by Kworb.net a few hours ago, the song improved four positions (to No.44). The tally is led by Justin Timberlake’s ‘Can’t Stop the Feeling,’ also co-written by Max Martin and Shellback.

Oscar Holter has contributed to the Swedish and Danish Eurovision legs. In 2009, he co-wrote Amy Diamond’s ‘It’s My Life’ in Sweden’s Melodifestivalen. It qualified for Andra chansen, but missed out the grand finale. In 2013, he co-wrote Kate Hall’s ‘I’m Not Alone’ in the Danish Melodi Grand Prix. It didn’t qualify for the final, yet Emmeli de Forest managed to win that year with ‘Only Teardrops.’

WelcheMusic.com will definitely keep track on the tally moving forward, as this song has the potential of reaching the upper reaches in no time.

At No.5 on yesterday’s Spotify streaming tally (SWE), the official UEFA Euro 2016 song ‘This One’s for You’ with David Guetta and Zara Larsson has arrived with a bang. The track bowed at No.8 on the official Swedish singles chart on Friday.

David Guetta & Zara Larsson – This One’s for You

As Dagens Nyheter reports, other songs claim to be Euro 2016 hits albeit non-official. The 7-year old Amadeus de la Motte’s ‘Bäst I Europa’ as well as the Melodifestivalen host Robin Paulsson’s ‘Abzolut’ are other songs fighting for attention.

Robin Paulsson is famous for his interpretations of Zlatan Ibrahimovic and is also from the same region as the football player. Hosting his own talk show Robins on Swedish public service, he was the presenter of Melodifestivalen a few years back. ‘Abzolut’ is written and produced together with Anderz Wrethow of Samir & Viktor, Hasse Andersson and Arash fame.

Justin Timberlake certainly made an impact in Saturday’s Eurovision. According to Swedish news daily Expressen, the singer will stay in Sweden for 30 days. Timberlake spent his Monday at Max Martin’s, who enjoyed his 22nd Billboard Hot 100 with ‘Can’t Stop the Feeling.’ His manager Johnny Wright explains why Justin Timberlake chose to appear in the Eurovision Song Contest.

Max Martin and Shellback co-wrote the global No.1with Justin Timberlake. “We love Sweden. During the *NSYNC days, our hits were recorded there,” has Johnny Wright previously stated. It comes as no surprise that Timberlake is picky of where he appears for promotion.

We brainstormed and realized that the Eurovision is one of the world’s greatest shows.

“Justin is a global, international artist. He understands the various platforms around the world. Justin is very picky about what TV shows he appears in. But Eurovision is all about new music. We sent the idea to them. They loved it. We looked for opportunities around the world. Justin is doing promotion at the moment. We brainstormed and realized that the Eurovision is one of the world’s greatest shows. It was a challenge for us since they never had an artist appear on the show that doesn’t compete. But further to our discussion, everything was sorted out,” says Johnny Wright about the guest appearance.

WelcheMusic.com has covered the Eurovision in a series of posts. Yesterday, Frans bowed on the UK singles chart at No.47. And we’ve also covered Dami Im and Sergey Lazarov.

Not to be confused with Loreen, the US R&B singer Usher has teamed up with Swedish House Mafia. Titled ‘Euphoria,’ it’s the final cut on the singer’s seventh album “Looking 4 Myself.” Currently climbing the charts with the Max Martin-penned ‘Scream,’ Usher is set to land yet another landmark album.

Haven listened to the set, there’s plenty of great music. The set was preceded by the first single ‘Climax’ produced by Diplo. According to Wikipedia, the Swedish House Mafia track is not listed as an upcoming single.  Hot off the heels of ‘Scream.’ ‘Lemme See’ has already been released charted on the French (No.88), Hot 100 (No.94) and the Hot R&B/Hip-Hop Songs (No.13) charts, current peak positions in bracket.

Usher Terry Raymond IV was born in 1978 and got his proper breakthrough in 1997 with the US No.4 album “My Way.” The singer has racked up no less than 45 singles to date. He collaborated with Max Martin for the first time on ‘DJ Got Us Fallin’ in Love’ (which featured Pitbull) on the set “VS.” (2010).

CHART REWIND. On the back of the farewell tour, WelcheMusic reviews Westlife’s career. The group has only managed to place one track atop of the Swedish singles tally. Released in October back in 2000, ‘My Love’ was written by the Swedes Jörgen Elofsson, Per Magnusson, David Kreuger and Pelle Nylén. Lifted off the second album Coast to Coast, ‘My Love’ became Westlife’s seventh UK No.1.  Coincidentally, it succeeded another boy band on the top of the charts – Backstreet Boys’s ‘Shape of My Heart.’ That track was also written by Swedes – Max Martin, Rami Yacoub and Lisa Miskovsky.

Both tracks were recorded at the Cheiron studios in Stockholm.

Listen to Westlife via Spotify: