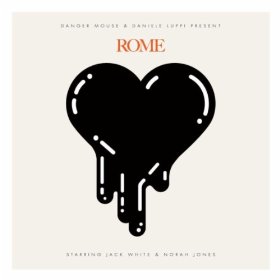 CHART SPOTLIGHT. By and large, spaghetti western in the style of Sergio Leone and Guisseppe Tornatoro owes a lot to the music composed by Italian 80+ veteran Ennio Morricone. He has also been the source of inspiration for Danger Mouse, the highly acclaimed producer who issued the album Rome this May together with the composer Daniele Luppi.

The album took five years to make and expect the first single “Season’s Tree” featuring jazz singer Norah Jones to bow this week in the UK. Included as one of three tracks with the female vocalist, the album also features The White Stripes’ Jack White. According to the Daily Gleaner, Rome is “a blend of six vocal tracks and nine instrumentals, a contemporary spin with a vintage Ennio Morricone feel. The session was recorded in a neo-classical church in Rome on analog equipment, the end result is far more than the soundtrack for a movie that does not exist. ” Quite interesting, it features the Canto Moderni choir featured on the soundtrack to The Good, the Bad and the Ugly starring Clint Eastwood. Rome bowed on charts globally in mid-May. Its highest peak is on the US Digital Albums chart (No.3), while peaking at No.11 on the Billboard 200 and at No.20 on the UK album chart.

Not a typical WelcheMusic favourite, Danger Mouse versatility is fascinating. The White Plains native formed Gnarls Barkley together with Cee-Lo Green, producing their albums St. Elsewhere and The Odd Couple. In 2004, Danger Mouse challenged the industry when he merged Jay-Z’s 2003 The Black Album with instrumentals from The Beatles’ 1968 White Album.  This was not appreciated by EMI, as the samples were unauthorized. Danger Mouse went on to produce the 2005 album Demon Days by The Gorillaz and Beck’s 2008 album Modern Guilt

As mentioned earlier, Norah Jones is featured on three tracks including “Season’s Tree.” Haven released four albums to date and amassed three US No.1 albums, Jones is one of the most successful jazz singers in modern time. 2002’s Come Away with Me was the high-profile debut of Jones, including no less than five singles ultimately selling more than 20 million albums worldwide.

Last November, the compilation album …Featuring was released by Jones. Collaborations with the likes of Ryan Adams, Foo Fighters and OutKast.

Finally, Some Kind of Awesome previewed “Season’s Tree” this April and is the staff favorite so far. the track was also dropped via Soundcloud this April and named one of the best new tracks on the eponymous blog. In addition, Chicago Now names it best album of the year. CHART REFLECTION. Take That has premiered the new artwork of the new single “Kidz” which will be issued on Feb.21. The track is included on the latest album Progress and will feature a brand new track – “Rocket Ship” as the flip side. A hugely successful 2010, WelcheMusic recently wrote about Take That beating The Beatles in terms of online sales via Amazon. The group’s comeback album was the biggest selling album in the UK last year, reaching No.7 in Sweden. So far, the only track to chart in this country off the album is “The Flood” which peaked at No.24.

What do you think of the art work?

Listen to the track via Spotify: Take That – Kidz

CHART REWIND. According to the Office for National Statistics, the 1992 Greatest Hits collection ABBA Gold is the biggest selling album since 1956. The agency has compiled sales statistics between 1956 and 2009 and the ABBA album has sold 4.6m copies since its release. Earlier this month, rumors of a reunion sparked on the Internet. Agnetha Fältskog has hinted that a charity event could be an excuse. In 2008, the group turned down $1bn to play a 100-date world tour in 2000.

The biggest selling album is Queen’s Greatest Hits (1981) which sold 5.7m. It was followed by The Beatles’s Sgt. Pepper’s Lonely Heart Club Band (1967) at 4.9m. The biggest selling single was Elton John’s “Candle in the Wind ’97,” which was rush-released after Princess Di’s death.

CHART REWIND. Guys, this was what you clicked on last week. You definitely embraced the new Jennifer Lopez track.

1.       RedOne+Jennifer Lopez=Lambada – Jennifer Lopez returns to the charts with the lambada flavoured “On the Floor” featuring Pitbull.