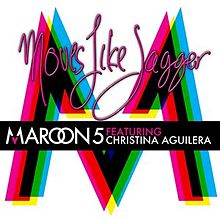 CHART SPOTLIGHT. Kudos to Shellback, the Karlshamn son who graced us with super hits like P!nk’s “So What,” Usher’s “DJ Got Us Fallin’ in Love” and Adam Lambert’s “Whataya Want from Me.” Since his debut with Britney Spears’ “If U Seek Amy” back in 2008, the songwriter/producer have successfully collaborated with geniuses such as Max Martin.

His latest achievement is Maroon 5’s “Moves Likes Jagger.” It’s the group’s first top ten hit sin 2007’s “Makes Me Wonder,” and has so far peaked at No.8. A duet with Christina Aguilera, the track has already become a WelcheMusic favourite! Hopefully, it will continue to climb and become one of the biggest ever for the band.