Loreen’s arrival at Stockholm Arlanda airport could end up in chaos. According to Aftonbladet, a thousand fans will greet her. “She won’t have to arrive at an empty arrival hall,” says Martin Sundin, member of Svenska Melodifestivalföreningen, a society devoted to the Eurovision. This afternoon, Loreen boarded a plane from Baku. She will have a short stop over in Vienna, at 19.10, finally arriving at Arlanda at 22.25 tonight.

Anyone who wants to greet the ‘Euphoria’ star is welcome to do so in the international arrivals hall at terminal 5.

Today, a cover of ‘Euphoria’ performed by the Royal Swedish Army band spread like wildfire via social media.

According to DN, 3.5m viewers watched the ESC on Saturday. Last year, 2.9m followed Eric Saade’s adventures in Germany. That’s a far cry from the 6m viewers racked up by Carola’s Munich appearance back in 1983.

Svenska Dagbladet reveals that SVT and the record label Warner are planning a welcoming party to honor the victory. It’s scheduled to take place at either the Royal Garden (Kungsträdgården) or Skansen in Stockholm on Tuesday or Wednesday.

Exclusive research, provided by social media monitoring company Meltwater, reveals that Loreen is the top favorite. The company has analyzed more than 44,000 posts, claiming that more than ten percent favors ‘Euphoria.’ According to Aftonbladet Nöjesbladet, betting companies across Europe put Loreen first. According to research from the online gambling group Unibet, Loreen’s ‘Euphoria’ equals more than 68 percent of the turnover for the ESC betting as compared to the Russian babushka’s 13 percent. Danes favors their own entry – Soluna Samay’s ‘Should’ve Known Better’- which equals 40 percent of the local turnover. Meanwhile, the pan-European portion is no more than 1.87 percent. Jonas Nilsson, PR Manager at Unibet says:

“Even if many put a bet on its own company, Loreen is the pan-European favorite among our customers. Our research predicts a victory tomorrow.” According to DN, competing betting company Svenska Spel, offers 1.7 times the money if you bet on Loreen. Runner-ups are Buranovskije Babusjki, 5 times the stake, followed by Serbia, Italy and Great Britain.

Although the final does not take place until tomorrow night, Loreen must impress the members of the local jury groups tonight, according to Aftonbladet. 42 jury groups cast their votes tonight. “A mediocre rehearsal may cost her the victory,” Torbjörn Ek, Aftonbladet’s ESC reporter in Baku. Haven seen today’s rehearsals he’s confident that the voice is there and she sang all the time. “Wow, it’s…soon. I wanted to make the final and now I’m in the final. I will just eat a nice meal, take it easy and there’s not much more to do than what I’ve always done. In a few hours, I’m on stage again,” Loreen told TT Spektra via Svenska Dagbladet.

ESC in the Rear View Mirror

A year back, we followed Eric Saade’s adventures in Germany and the feud with Russian singer Alexey Vorobyov. As Svenska Dagbladet reports, little more than a Swedish victory tops Saade’s No.3 ranking with ‘Popular.’ Carola’s ‘Invincible’ ended up at fifth place back in 2006, and was followed by four tough years with one missed final and three lower rankings. Svenska Dagbladet’s ESC expert Harry Amster is convinced that it will either be Loreen or the ‘elderly women’ from Russia. He also points out that Greece, Cyprus and Serbia have strong entries.

28-year old singer Loreen won the hearts of the Swedes with the seductive dance pop track ‘Euphoria.’ Alongside Dead By April’s ‘Mystery,’ Loreen is qualified for the Melodifestivalen 2012 final at the Stockholm Globe Arena next month.

I wouldn’t be surprised if we’ll see Loreen on the stage in the Eurovision Song Contest in Azerbaijan and she might be joined by Tooji, whose ‘Stay’ qualified in the last heat of the Norwegian Melodi Grand Prix. Sweden’s Peter Boström has written both ‘Euphoria’ and ‘Stay,’ the latter sounding very similar to Eric Saade’s ESC top three hit ‘Popular’ from 2011.

Née Lorine Zineb Noka Talhaoui in October 1983, Loreen is of Moroccan-Berber descent. The singer made her breakthrough in 2004, as one of the finalists of Sweden’s Idol. She was actually picked as a wildcard by the judges, not immediately winning the public’s heart. Singing, Alicia Keys, Stevie Wonder and P!nk throughout the competition, her first single was ‘The Snake’ with the duo Rob’n’Raz. Loreen also worked as a television presenter at TV400, which has changed its name to TV11.

‘Euphoria’ did not only win the first Melodifestivalen heat, the reaction on Twitter and in social media channels were nothing short of phenomenal. A tremendous performance, leaving many viewers breathless and questioning whether it was live or playback (it was live, believe me!).

Last year, Loreen made her Melodifestivalen debut with ‘My Heart is Refusing Me,’ co-written by her with Moh Denebj and Björn Djupström. Despite not qualifying for the final, the single peaked at No.9 on the Swedish singles chart and spent 19 weeks on the tally. I wrote about her chart success last year in Loreen’s Sweet Revenge. According to the Scandipop blog, Loreen calls ‘Euphoria’ very mystical and dynamic. 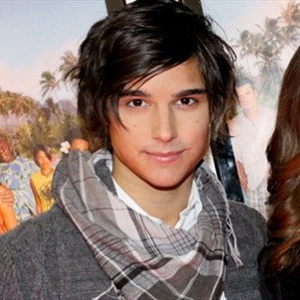 CHART REFLECTION. Eurovision favourite Eric Saade managed to get the message across earlier this week, when giving a performance at Allsång på Skansen. A brand new album is expected this November! WelcheMusic covered the Allsången event last week as it was heavily criticized for promoting songs with sexual content.

While leading news daily Aftonbladet managed to tweak the story as a PR stunt, fans were rather happy to hear that new material is waiting in the wings. The 20-year old singer just released his Saade Vol.1 album on the back of his Eurovision success. Including the entry “Popular,” the set also boosts the No.2 hit “Hearts in the Air.”

Eric Saade is currently on tour and will also promote his album internationally after the summer.